This blog was originally posted by Moore Industries.

State regulations required a major pulp and paper company to monitor and record daily effluent water rates. This requirement was being fulfilled by sending an employee from their main control site to a remotely located pond three times a day to manually record water levels. This process was inefficient, time-consuming and didn’t provide them with real-time data.

By installing a system utilizing technology from Moore Industries, the pulp and paper company implemented a system that is scalable for future installations while reducing employee workload and maintaining state regulatory compliance. 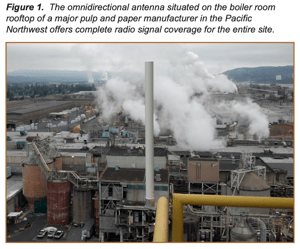 A leading pulp and paper company in the Pacific Northwest needed to monitor effluent water flow as it drains into a remote pond at their facility. Because of a new government regulation, personnel had to drive a truck three times a day to the remote site, log the height of the water along with the date and time and return to the office. The company realized that this was not an efficient use of time and wanted to automate this process. This was done by calculating changes in water level in a V-neck weir entering in the pond and using this data to calculate flow rate.

Along with automating the collection of flow data, they also wanted this data to be displayed on an Ethernet based Human Machine Interface (HMI) panel in their boiler room. Moreover, since the data was required by the state, they needed to implement a historical collection and archiving system that allowed them to easily view historical data and produce reports when required. Seeking a quick and efficient solution, the pulp and paper company turned to Autoline Controls, a full-service manufacturer’s representative of process instrumentation with an area of expertise in the pulp and paper industry. 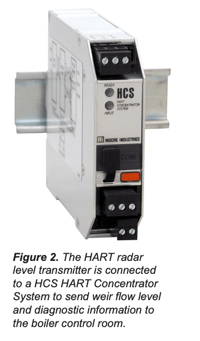 There were two main reasons why Autoline Controls chose the HCS for this solution. First, the HCS accurately gathers the digital level data from the transmitter along with giving the pulp and paper managers access to additional process variable data and critical diagnostic data about the transmitter’s health and performance. The HCS also converts this HART data directly to an industry standard MODBUS RTU format, a serial communication standard that almost all industrial radios support.

The HART radar level transmitter has a front panel display for local viewing and connects to the HCS’s input via a 2-wire twisted pair cable. The radar gauge sensor measures the water height in the weir and publishes this data along with other process variable and diagnostic data to its internal HART memory location. This HART data is then polled by the HCS two to three times per second. The data is then mapped to a MODBUS memory map that resides in the HCS. This constant polling process ensures that data is continually updated on both the HART and MODBUS side of the HCS. 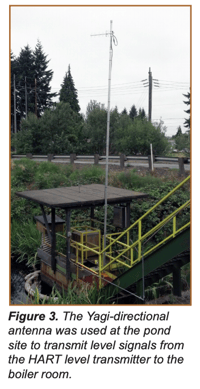 Using the HART radar transmitter connected to the HCS solved the problem of measuring the water level; the next step was transmitting this data to site operators. In this case, the data needed to go to an Ethernet based host HMI panel and a historical collection system. There were no Ethernet networks, fiber lines or twisted pair wires available from the pond site to the control room so installing a local wireless network was chosen as the best method for acquiring these signals.

An initial wireless site survey was done using photos of the site. This showed potential problems in establishing a direct line of communications from the field site to the host system due to expected tree growth in the forest or accumulated snow on tree branches that may diminish the wireless radio’s signal strength. Since there was potential for future RF signal path attenuation, Autoline Controls recommended the following wireless components:

While this could get quite expensive with traditional PLC or DCS solutions, Autoline Controls recommended adding a small Moore Industries NCS NET Concentrator System® to the host site. The NCS is a dynamic I/O system that can act as an expandable I/O system, MODBUS RTU master, MODBUS RTU slave or MODBUS/TCP slave. The NCS also provides a myriad of math and logic solutions through its ISaGRAF embedded control and logic program.

The heart of the NCS system is the Ethernet/MODBUS Module (EMM), which is essentially the NCS’ CPU and communications center. The EMM takes on various roles in this application. It first acts as the MODBUS RTU master and polls the HCS at the pond site through the serial port of the WNM radio. The MODBUS RTU data collected from the HCS contains the HART data from the level transmitter and is then placed into the EMM’s local memory map. Here it is stored as MODBUS RTU and MODBUS/TCP compliant registers. 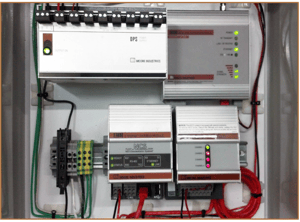 Figure 4. The wireless receiving panel installed at the boiler room of the pulp and paper mill. An EMM Ethernet/MODBUS Interface Module of the NCS NET Concentrator System served as a MODBUS Master to retrieve HART data from the HCS at the pond site.

The EMM is polled as a MODBUS/TCP slave by the Ethernet-based HMI at the boiler room so that site operations can view the level and diagnostic data. The EMM is then programmed with ISaGRAF logic toassign process variables to the NCS’s AOM Analog Output Module. The AOM provides up to four 4-20mA or voltage signals (ranges from 0-10V) that can be taken to any analog receiving device, such as a historical data collection system.

Ensuring a full time communication link with the pond site was also a latent request by site operations. Therefore, a simple communication watchdog routine residing in the EMM was written in ISaGRAF to monitor the wireless connection and instruct the MODBUS RTU, MODBUS/ TCP and 4-20mA values from the AOM module to go to pre-defined limits if there is a wireless link failure to the EMM.

This allows site operations at the boiler room to immediately tell when the wireless communication link has failed. Once the link is re-established the system automatically picks up where it left off, transmitting and making real-time process variable and diagnostic data from the level transmitter available.

The system is now enabling the pulp and paper company to efficiently get accurate and required readings on the levels in their effluent water system.

“Part of their license with the state required them to send an employee to the site to write down numbers three times a day, seven days a week,” Stepper said. “That’s essentially one-half of the work of a full-time employee – including having to work weekends. This system automates their formal measurement and documentation requirement process and lets their employees focus on other critical aspects of their operation.” 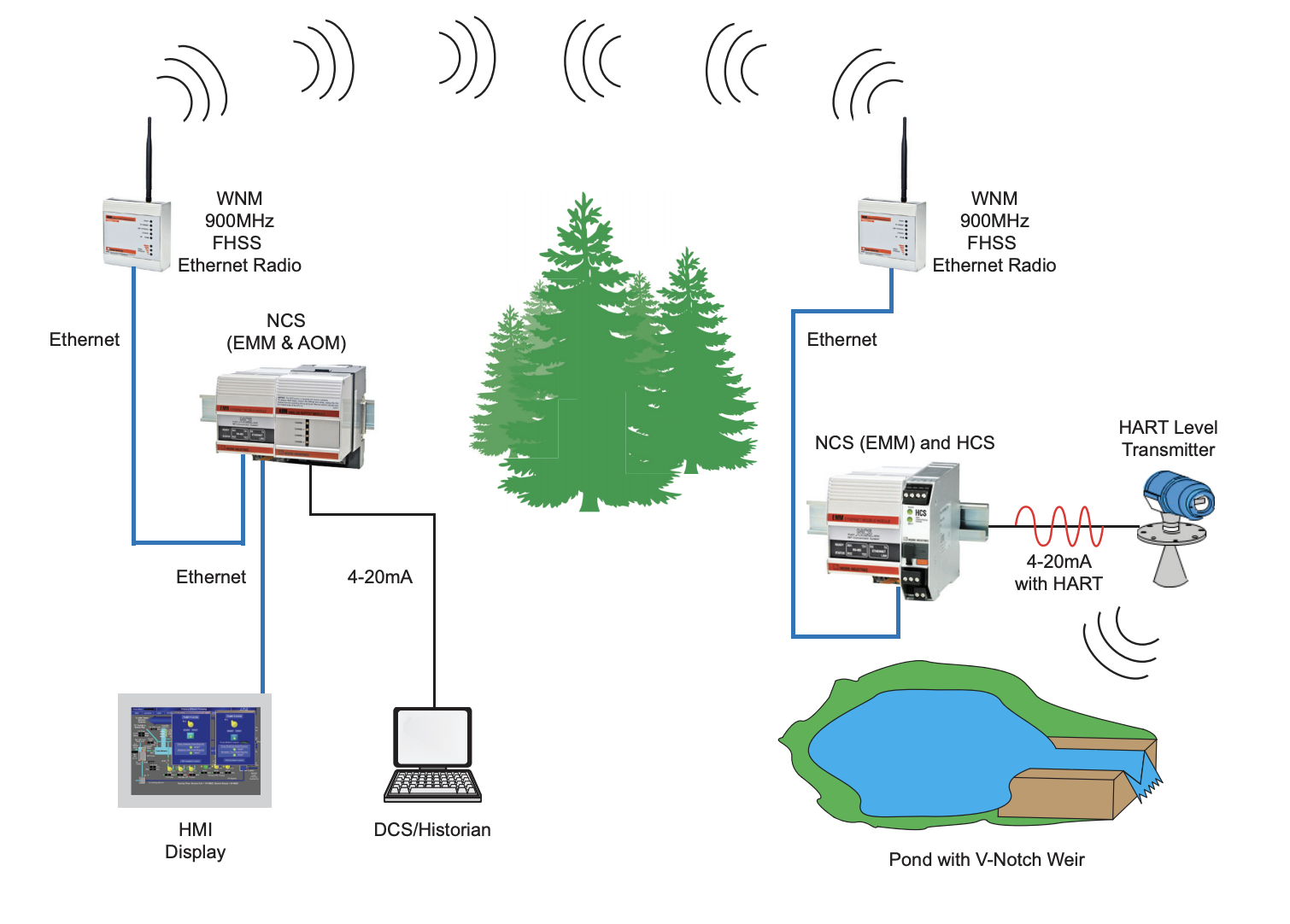 Figure 5. HART flow level measurements at the pond site were converted to MODBUS RTU by a HCS HART Concentrator System and sent from a WNM Wireless Network Module at the pond to a receiver radio at the boiler control room. The information was relayed from the wireless radio to an HMI display and DCS/Historian by the NCS NET Concentrator System.

Jim McConahay, P.E., is a Senior Field Applications Engineer for Moore Industries-International, Inc., concentrating on process control instruments, SCADA, SIS (Safety Instrumented Systems), fieldbus, data concentrators and communications links. He is an ISA member and holds a BSEE and MBA from Cal Poly University, Pomona. He has more than 30 years of design and installation experience in production and automation equipment.